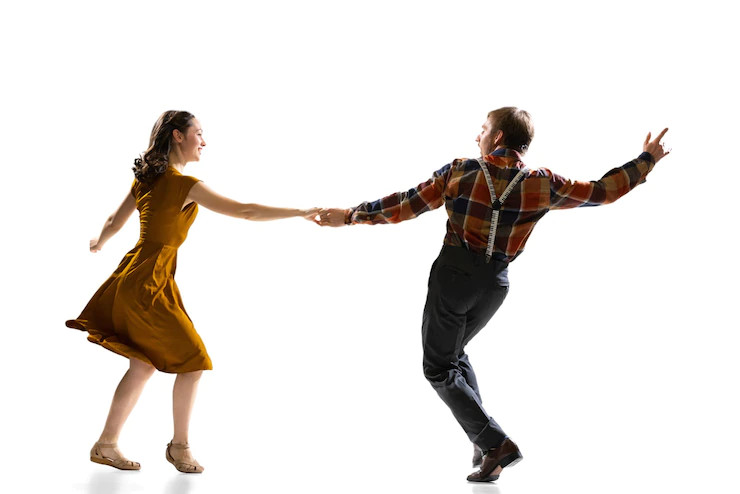 Swing dancing has been around for nearly 100 years.

Since the Jazz Age in the 1920s, swing dancing has grown to include a long list of dances, making it difficult for beginners to learn where to start.

Here are eight of the most popular types of swing dancing that are perfect for beginners.

Originating in the 1930s, the Lindy Hop is named after pilot Charles Lindbergh and his flight across the Atlantic.

Lindy Hop includes both six- and eight-beat patterns with lots of flips, kicks, and swings.

Performing lindy dance requires a lot of movement on the dance floor and is often associated with swing dancing.

Balboa is another original swing dance developed in the 1920s.

It originated in Southern California due to smaller dance halls with limited space and a more conservative attitude in the area.

The dancer holds the closed position in an upright position.

The Shag was introduced in the Carolinas in the 1920's and spread across the country over the next decade.

It was one of the most popular swing dances of its time and was often performed to fast-paced music.

However, there are several variations of the Shag, including the Carolina Shag, St. Louis Shag, and Collegiate Shag.

Like East Coast Swing, West Coast Swing is a versatile dance suitable for a variety of musical genres, including jazz, blues, pop, hip-hop, and rock.

It is also a variation of Lindy Hop, but originated in dance halls around the Los Angeles area on the West Coast.

Jive is an upbeat dance that evolved from Eastern Swing after the arrival of US troops in Britain during World War II.

It dances to fast-paced music, featuring turns, spins and kicks.

Boogie-Woogie originated in the 1940s.

Unlike most other swing dances, Boogie-Woogie is not for jazz.

The dance comes from boogie-woogie music, which is a form of the blues.

It focuses more on footwork, often in a six-beat pattern.

Jitterbug is probably the most famous and misunderstood swing dance.

Over the years, the name "Jitterbug" has been used to refer to a variety of swing dancing styles.

However, it is now generally recognized as a single-rhythm variation on East Coast swing.

These are just some of the most popular types of swing dancing.

After learning everything from Lindy Hop to Jitterbug, you may find it easier to learn new dances and expand your dance floor.

DC Hand Dance is a swing dance that arose in Washington, DC in the 1950s, out

While Hand Dancing is still primarily a local dance practice in northern Maryland and as far south as Virginia, it has been seen by many West Coast swing dancers.

Historically, the name "Hand Dance" comes from the return of the Neo-Swing in the 1990s.

However, it started in the United States. Different styles are happening worldwide, for example, in Germany, England and France, Brazil, Australia and New Zealand.

Among them, what about jitterbug?

Jitterbug is not a special dance. It is an umbrella term for all fast swing styles.

When you hear someone say jitterbug, it will be viewed differently in Maryland than someone saying jitterbug in California.

As you can see, swing dancing is a type of backup dance that emerged in the 1920s.

There are many types of swing dancing, each with its own unique style.